Today, I am grateful for...

our house...
I've been falling in love with it again... This week, I've been finishing up the rearranging, reorganizing and cleaning. I love the kids' room and sleeping in Mama and Papa's room, and the downstairs now has space for two kids' tables, and the boys spend time writing, coloring, painting, and playing there.

N.A.E.T
I have been feeling so much better since beginning N.A.E.T. treatments a month ago. I can just feel a vitality inside that I haven't felt for a long while.

nice people
The nice person at the bank who helped me and waived some of the WAY TOO MANY overdraft charges received due to my own error. Thank you!

neighbors
Ever since we almost moved but then didn't, I have been thinking, very vaguely, of putting together a block party but feeling like it would be too much work. And then, voila! my two nearest neighbors just handed out flyers for a block party next week! Yay, universe! 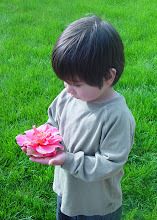 I was having a particularly hard time adjusting to life as the mother of two children. My own mother suggested I begin a gratefulness journal. She said, "Before bed, write down five things you're grateful for, every day."

My oldest son, who was four at the time, became intrigued with what I was writing, and soon joined me in this nightly ritual.

We snuggle in bed, and we talk about what we feel grateful for, and write it down in our journal. I then transcribe what we've written here.

It has been wonderful to write by hand in a journal, and to hear my children give spontaneous and heartfelt declarations of gratitude. They are a good model for me.

Thank you for stopping here, and reading. May you feel peaceful and at ease. May you be healthy and happy.

May you give thanks with joy for what is.